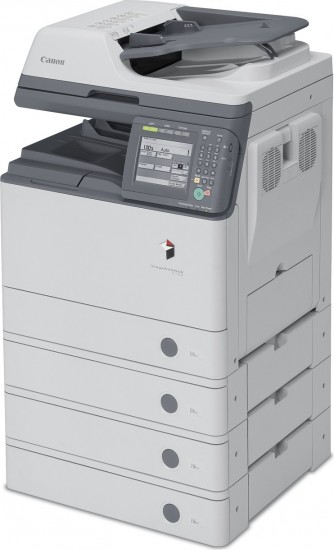 With a compact footprint that is ideally suited to both desktop and floor-standing placements, the imageRUNNER 1700 Series offers businesses the reliability and uptime necessary to improve productivity. To enhance device functionality and accessibility, the imageRUNNER 1700 Series delivers a series of technologies that include powerful color scanning/sending technology and enhanced device access and navigation through a large, monochrome 5.7-inch LCD touch panel featuring with accessibility enhancing tilting capability.

The Canon imageRUNNER 1700 Series is comprised of six models in three incremental speeds, divided into base and "iF" configurations.

All imageRUNNER 1700 Series devices are equipped with one 550-sheet capacity cassette as standard, handling up to legal-sized media. Up to three optional cassettes can be added for a maximum paper capacity of 2,300 sheets, including stack bypass tray capacity (of 100 sheets). All the models offer UFRII LT for printing, 512MB RAM, Color scanning capabilities, Color Send and a single USB host port. imageRUNNER 1700 Series models are ENERGY STAR qualified. "iF" models are equipped with additional print and network scan functions, which are also available options for base models including: PCL and Post Script (emulated) printing; Searchable PDF; and Fax capability.

The new imageRUNNER 1700 Series are expected to be available for customer delivery in October 2011 through Canon Authorized Dealers and Canon Business Solutions. The manufacturer's suggested retail prices will be:

All ppm's and imps's based on letter-sized output unless otherwise noted.

*Available by version-upgrade after introduction